Vikings: Valhalla is an upcoming Netflix historical action-fiction drama television series produced by screenwriter Jeb Stuart that is a spin-off of History’s Vikings. This series begins a century after the previous series and tells the stories of some of history’s most famous Norsemen: Leif Erikson, Freyds Eirksdóttir, Harald Hardrada, and William the Conqueror, a Viking descendent, were all Viking descendants.

Vikings: Valhalla begins in the early 11th century and follows the legendary exploits of some of the most renowned Vikings of all time, including Leif Eriksson, Freydis Eriksdotter, Harald Hardrada, and Norman King William the Conqueror. As they struggle for survival in an ever-changing and evolving environment, these men and women will forge a trail.

One news site announced on November 28, 2020, that Danish actor Kenneth Christensen, Icelandic actor Jóhannes Haukur Jóhannesson, Swedish actress Frida Gustavsson, and David Oakes had been cast in the series. Frida Gustavsdóttir was subsequently discovered to have been cast as Freyds Eirksdóttir, while Jóhannes Haukur was cast as Olaf “the Holy” after early sources incorrectly suggested that he had been cast as Harald Hardrada, a role that went to Leo Suter. Caroline Henderson was cast as jarl Haakon, the present ruler of Kattegat, based on Canute the Great’s subordinate ruler Haakon Ericsson. Canute the Great was played by Bradley Freegard, while his wife lfgifu was played by Pollyanna McIntosh. Leif Eriksson was played by Sam Corlett.

Vanessa Alexander, Declan Croghan, and Eoin McNamee are among the writers for Jeb Stuart’s show.

Vikings: Valhalla began production in early October 2020 at Ashford Studios in Wicklow, Ireland, where Vikings previously took place. The shooting was halted owing to a high number of positive COVID-19 tests, only to restart a few days later. A number of cast and staff members were claimed to have tested positive at the time; however, it was later revealed that the production had received a number of false-positive tests. Filming was set to restart in August 2021 at Ashford Studios in Ireland.

Season 2 was completed in November 2021. 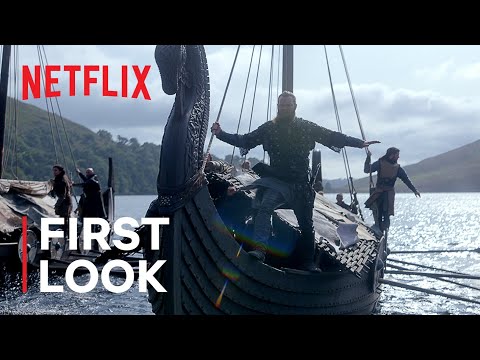